GSF is required to extend battery life, and other lies we're told while our data is slurped

The path to complete digital sovereignty is lonely, long and difficult. Sometimes, it is also fraught with improper signage. 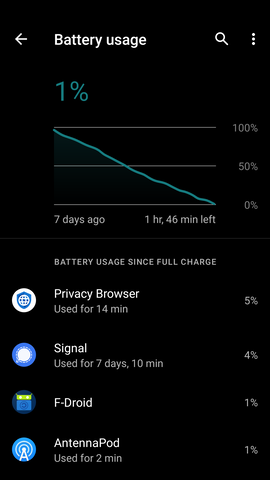 Exhibit A, shown above, is a screenshot. It was taken on my recently degoogled 2017 Samsung A5. A decent device at a decent price, acquired from a refurbisher to replace my old and worn S5 Mini Duos. The only shortcoming that cannot be overlooked on the A5 is the lack of a user removable battery. Otherwise, it fits my current needs, and it runs well with LOS 18.1.

In fact, it runs so well that I see no need for setting the performance profile to anything other than “Power save”. In this setting, as seen above, it is possible to obtain up to a week of standby with this device (though 5-6 days is more common).

You’ll be forgiven for thinking that I have published a rant for the sole and explicit purpose of bragging about battery life on a used Android phone. Impressive as it is without resorting to Samsung’s Ultra Power Saving, the reality is that I don’t use my smartphone very much these days. When I said standby, I really meant standby. The thing mostly just sits there waiting for calls and Signal messages. For a mobile phone, it is quite fixed. For a smartphone, it feels quite dumb.

Back on topic. The real purpose of this rant is to alert the readers to the fact that they are being lied to.

This phone has no GSF installed on it. It cannot run anything from the Google Play Store. It cannot use the Push Notification APIs. Both instant messaging apps, and both email apps which run on this device run in the background constantly. You would think, judging by Google and Samsung’s propaganda, that battery life on this device, in it’s present configuration, would be miserable. Far from it. I’m fetching a chair so I can wait comfortably for a screenshot of a similar device with better battery life running GSF. Or more specifically, a screenshot of another A5 2017 with stock ROM or LOS+Gapps, in any power profile other than Ultra Power Saving, which lasts >6 days standing by without any special tomfoolery beyond selecting which apps run in the background and which apps don’t.

You have been bamboozled. Requiring apps to go through GSF rather than allowing them to occasionally run in the background is not about energy efficiency. It’s about money. It’s about having all your apps funnel that cherry sweet unique device identifier through someone’s servers so that your personal profile can be more effectively sold to advertisers. It is about having GSF on the phone so that it can call back home to it’s masters with data points which are exceedingly hard to harvest otherwise. The hilarious part is as follows: spyware needs energy to call back home.

You have three choices right now. Accept that your smartphone will never be yours and that it will always serve another master first, compromising your privacy at every chance it gets; put in absurd amounts of work to obtain a device that’s only close enough to the ideal of a machine which serves you and only you; or forego this sociopathic hellscape and ditch the monitoring device altogether.

I have no intention of repeating the process required to bring a smartphone in line with my privacy and general usage tastes. As such, I have decided that this device will not have a replacement. When this A5 dies (or I decide to decommission it, whichever comes first), I will not have another smartphone. These devices are currently built under the assumption that information about your life is fuel for the ad machine. My interest in being an active participant of this contraption dwindles.

A suggestion to the readers is to consider the trade-offs that come with owning a smartphone (or not) and make a decision right now, as you may not be able to decide for yourself past a certain point. For my current situation, the optimal spot seems to gravitate around the concept of a “Landline++”, where I am reachable in more than one way through the same device, and I can definitely make full use of the smartphone’s capabilities if I so choose, including the ability to temporarily take it somewhere else or use it as a small computer, but it’s been a long time since I was under the illusion that I need to carry this thing all the time or be within two arm lengths of the rectangle to stave off the impromptu visits from the void.1

In a slightly unrelated note, keep in mind that if Google, Apple and Microsoft have their way, you will not be able to log in to anything, even through your web browser, without having your tracker next to you. When the time comes, we’ll need enough people saying “I don’t own a smartphone” to justify the pushback against this “more secure” standard of authentication and prevent this type of nonsense from becoming the new normal. Remember when telephones were optional? Yeah, good luck going back to that if you don’t want to be bothered about it.

Your devices should serve you, not the other way around. And they certainly shouldn’t serve anyone else. Refuse mediocre solutions for problems which did not need to be solved in the first place.